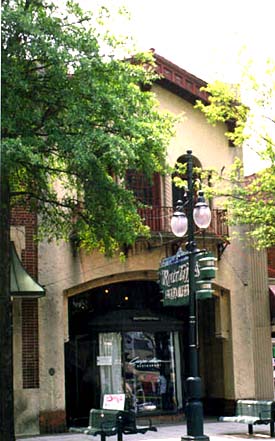 1. Name and location of the property: The property known as the Ratcliffe Florist Shop is located at 431 South Tryon Street, in Charlotte, North Carolina.  To see a brief biographical video of the Ratcliffe-Otterbourg House go to http://officialcharlottehistory.ning.com and click on “Video” at the top of the page.

2. Name and address of the present owner of the property:

5. Current Deed Book Reference to the property: The most recent deeds to this property are listed in Mecklenburg County Deed Book W20 at page 340. The Tax Parcel Number of the property is 125-052-12.

b. integrity of design, setting, workmanship, materials, feeling and/or association: The Commission contends that the attached architectural description by Miss Lisa A. Stamper demonstrates that the Ratcliffe Florist Shop meet this criterion.

Date of Preparation of this Report:April 4, 1984

Perhaps the most charming and out-of-the-ordinary small business place in the commercial center of Charlotte is that occupied by Ratcliffe Flowers on South Tryon Street. For over fifty years, it has stood in great contrast to its plainer or more institutional neighbors. When Louis G. Ratcliffe (1893-1961) started his floral business next to the Latta Arcade in the 300 block of S. Tryon in 1917, the area was still a mixture of small businesses, residences and some vacant properties.1 A native of Henrico County, Virginia, he entered the service a year after starting the new business and saw action with the 323rd Infantry in France during World War I, where he was awarded the Purple Heart. After demobilization at the close of the war, Mr. Ratcliffe returned to Charlotte and enthusiastically plunged into over fifty years of activity in the city’s business and civic life. He served variously as a National Committeeman of the American Legion, Mecklenburg County Democratic Chairman, Chairman of the Welfare Board, President of the Charlotte Chapter of the American Red Cross, and as director of Home Federal Building and Loan. In addition, he was a member of the Rotary Club, a Mason, a Shriner and a steward of his church. Clearly Louis Ratcliffe was a man greatly involved with his community.2

As the community grew and prospered in the boom times of the 1920’s, so did the floral concern which supplied flowers for weddings, funerals, church services and special occasions in the expanding city. By the end of the decade, Ratcliffe decided the time was right for new quarters to house the successful business, and so he hired William H. Peeps, a local architect, to draw up the plans. Perhaps Peeps was chosen for the job because he had also done the Latta Arcade, Ratcliffe’s business neighbor for twelve years. 3 William Peeps (1868-1950) was originally from London, England, and had first settled in Grand Rapids, Michigan. From there he came to Charlotte in 1905 to participate in the growth of this New South community, and for forty-five years thereafter made a significant impact on the architectural history of the city. In his long Charlotte career, which only ended when he fell ill at the age of 82, Peeps was responsible for numerous landmark structures in the city and in other areas of the state.4 Beside Ratcliffe Flowers, he designed a number of important commercial buildings in the city, including Ivey’s Department Store, Eckerd’s Drugs, the Latta and Court Arcades, and the Hovis Mortuary (now Queen City TV) on North Tryon. Of equal significance are the many fine large residences Peeps designed for a number of the city’s wealthy citizens, including that of J. B. Ivey, John Bass Brown, George W. Graham, Jr.5 and others. In early 1929, the plans for the new florist shop were complete, and on March 20th of that year, the contractor, Southeastern Construction Company, located at 210 E. Second Street, took out a building permit to begin work. In the permit it was estimated that the new store would cost $16,000.6 At the time when Ratcliffe Flowers was built, Charlotte was experiencing an unprecedented building boom which reflected the prosperity of the time. A perusal of the building permits of that year clearly reflects great activity in both business and residential, mostly suburban, construction. It was as part of this general prosperity that the new Ratcliffe Flowers shop came on the scene late in 1929.

Unfortunately for many in the community, the boom times ended soon thereafter, and a ten-year depression followed. Ratcliffe Flowers, however, steadfastly weathered the storm in its charming, Peeps-designed two-story store. Over the years, in fact, the business, which is still in the family, expanded into a wholesale division and a greenhouse operation in addition to the city center retail outlet.7 Thus through all the changes in uptown Charlotte over the last fifty-some years, this delightfully unusual retail store, which reflected both the tastefulness appropriate for a floral shop and a confidence in its longevity, has graced South Tryon Street through the best and worst of times, and will no doubt continue to do so for a long time.

7 Interview with Margaret Osborne, above.

by
Lisa A. Stamper

Located on South Tryon Street between First and Second Streets, Ratcliffe’s Flowers is a well preserved example of the Mediterranean Revival Style. Designed by the architect William Peeps, this two-story building was completed near the end of 1929. Built at a time when new business development was at its peak in central Charlotte, this florist shop is very possibly the city’s finest example of early twentieth-century commercial architecture.

More than one-half of the front of the Ratcliffe’s Flowers building is two-stories high, while the back of it is one-story high. The tar and gravel roof is flat on both sections, and the back part contains a gabled skylight. To capture the mood of the Mediterranean, Peeps used a variety of materials and forms in the design of the front facade. The brick is stuccoed, and a decorative wooden gable was placed at the roofline. This gable, which spans the whole width of the facade, has deep sections to hide the flood lights which brighten the front facade at night. A second-story balcony is decorated with a cast-iron balustrade and brackets. Even a few rows of glazed tile separate the front facade from the sidewalk. The neon sign is not original, but was installed shortly after the florist shop opened for business. The deeply recessed first-story storefront consists of two wood and glass doors flanking a protruding wooden framed display window. The plan of the display window is one-half of an octagon shape. It has its own high-pitched roof which is basically semi-circular in shape. The name of the shop is displayed in white letters on the front of the display window roof. Above these doors and display window are five panes of floral patterned glass framed by wood. The second-story of the front facade exhibits three round-arched openings with the middle one being slightly taller in Palladian fashion. These wooden framed openings serve to look like windows and function as doors. Each opening has a half-circle section above a large rectangular section. Each half-circle contains four vertical lights. The rectangular section of each outer opening contains sixteen lights while the inner one contains twenty lights. Four stylized columns with Corinthian capitals separate the second-story openings from each other and the rest of the facade. The shafts of these columns have a spiral groove cut into them; a Mediterranean motif.

The interior reflects the exterior style, employing several exterior elements and motifs. The interior plan consists of a second-story half-attic, a high first-story, and a rear half-basement. Interior finishes include plaster walls, chestnut wood trims, and flagstone floors. Many of the furnishings are original and are kept in excellent condition. The first-story interior has two-levels. The lower one is the full length of the building and is composed of three sections. The upper-level covers the second section only and is used as an office. The first section is the showroom and is defined by the front wall and an interior wall with three round arched openings. It has a barrel-vault ceiling which invokes a grand spacious feeling in the narrow room. The second section is a small work area defined by the arched interior wall and another interior wall with a heavy, arched double door. The third section is contained within the rear of the building and is also used as a work area.

The showroom has a flagstone floor, possibly made with stone from Arizona. Over the years, wax had built-up on the floor, but it has been recently cleaned leaving the original stones in good condition. Six chestnut columns of the molding with quatrefoil motifs add to the ornamentation. A chestnut trellis is an original display device which is still in use. Track lighting has recently been installed on this trellis to illuminate displays on the wall behind it; however, this lighting system is inconspicuous. Original glass and iron furnishings, even a marble top table, are in excellent condition and presently display various floral arrangements. Decorative urns, one from India, are also original furnishings still in use. Even original light fixtures are intact. The arched interior wall which defines the back of the showroom contains three large, high, round-arched openings, reflecting those of the front facade. As one enters the showroom from the front, the left arch is practically the full-height of the wall. It contains a wooden staircase which leads to a second-level landing. The other two arched openings stop at the bottom of the second-level. These openings have been covered with plywood boards, but the arched shapes are still prominent. An iron railing positioned in front of these two arched openings has been temporarily removed to make room for a Christmas display.

Underneath the second-level arched openings is a large rectangular opening. Simple, thick columns support a dentiled lintel at the top of this opening. A cabinet located next to the wall now blocks part of this opening, which allows one to enter the small workroom underneath the second-level office. The small workroom contains very little. It has only a few shelves and thin workbenches for employee use. Since the public can see into this area, it is not used extensively and is more of a transitional space between the showroom and the rear work area. A wooden double-door opens into the back work area. Here most of the preparation of floral arrangements takes place. Since this back room is not in the public’s view, it is more utilitarian in finishes and furnishings. Again, many of the original fixtures and furnishings are still in use and in good condition. Even the first cooler is intact. A wooden staircase, which leads to the second-level landing, mirrors that from the showroom. It seems that accessibility to the total building was a main consideration in the initial design of the second-level office. It was designed so one could look through the arched openings into the showroom or out the open back into the work area. The office is easily accessible to the showroom and workroom by the stairways. In addition, there is a wooden staircase which leads from the landing to the attic. By examination of photographs made shortly after the store opened and in possession of Mark V. Ratcliffe, the interior seem to have had only a few alterations since then. The Ratcliffe’s have gone to great lengths to preserve and maintain their florist shop’s elegant romantic ambiance. Presently, many people come into the store to marvel at the excellent workmanship and care put into Ratcliffe’s Flowers.

This entry was posted in Survey & Research Reports.